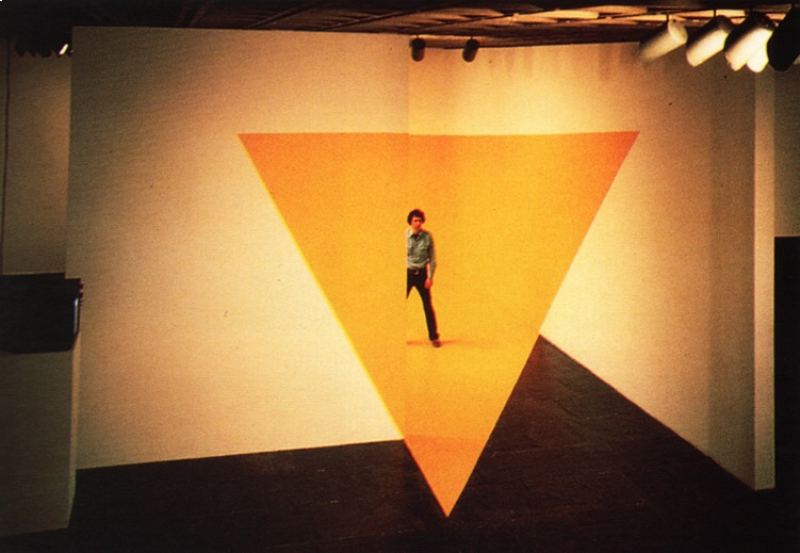 The Moving Image Archiving and Preservation (MIAP) program at the NYU Tisch School of the Arts and the University of Miami’s Norton Herrick Center for Motion Picture Studies have joined forces with the Estate of Buky Schwartz to preserve the late artist’s extensive archive of multimedia works.

From the mid-1970s, Schwartz’s installations employed video and closed-circuit television to shape a viewer’s perception of sculpture and space. MIAP graduate student Eddy Colloton has cataloged, assessed, and planned for the preservation of Schwartz’s video works as part of a year-long thesis project, to be presented 5 pm-6 pm on Wednesday, March 30, at the Michelson Theater in NYU Tisch’s Department of Cinema Studies, located at 721 Broadway, Room 648.

“This is an important undertaking that will bring the artist’s accomplishments to a new generation of curators, artists, and scholars,” said film and video art curator John G. Hanhardt, who worked closely with Buky Schwartz.

Colloton’s thesis project focuses on Schwartz’s single-channel video works and video-based installations. In January, Colloton travelled to Miami to perform an assessment of the audiovisual materials in Schwartz’s collection, referencing documents and photographs to understand their original installation. The University of Miami provided office space, viewing equipment, and library resources during Colloton’s stay, as well as research supervision from Christina Lane, Director of the Norton Herrick Center for Motion Picture Studies. “We are very pleased to be forging this partnership with the NYU MIAP program,” said Lane. “This collaboration offers us a terrific opportunity to facilitate and promote film and video research, conservation, and education.  It is a pleasure and an honor to help bring awareness to the historical and artistic significance of Buky Schwartz’s work.” To supplement his archival research, Colloton interviewed key individuals to learn more about the exhibition history of Schwartz’s installations. Conversations with curators, restorers, and the artist’s former studio assistant informed his technical analysis of the video works and his plan for their ongoing preservation. “Buky Schwartz’s work occupies a unique and exciting moment in the history of video art,” said Colloton. “His ability to harness what was then a new medium for artistic practice was significantly ahead of its time. Unfortunately, the complexity of exhibiting and collecting his work has contributed to the relative lack of awareness of his impact.  My goal is to simplify that complexity and make Buky Schwartz’s work more accessible to everyone.”
Full presentation video recording
This goal firmly supports the mission of the artist’s Estate, which strives to raise public awareness, outreach, understanding, and enjoyment of Buky Schwartz’s video art legacy through exhibits and collections, education, research, conservation, historical restoration, and preservation. “We are thrilled that Eddy Colloton chose to work with us for his project,” said Estate Director Shlomi Ron.  “Buky Schwartz’s archives contain important documentation of his early video installations, which played a fundamental role in video art history. Colloton’s work will help illustrate the artistic process as part of a preservation plan to make the collection available for future researchers and the public.” MIAP is a two-year course of study that trains future professionals to manage preservation-level collections of film, video, new media, and other types of digital works. The program provides prospective collection managers and archivists with an international, comprehensive education in the theories, methods, and practices of moving image archiving and preservation.  Visit here for more information about MIAP. Read full press release on NYU site  here.

Latest news about our recent programs, exhibits, and collaborations - all designed to expand the art legacy of Buky Schwartz.